The history of Edinburgh Castle is both rich and varied. The castle dates back further into history than you may realise. Once a royal palace, military barracks, a prison, and a fortress. You can feel the history as you walk around. Being such an impressive sight it’s little wonder we repeatedly hear the questions asked, who built Edinburgh Castle and when was Edinburgh Castle built

The hill it sits on was formed many millions of years ago by volcanic rock, which made it resistant to erosion, meaning that it remained while the softer hillside around it disappeared over generations. This hill is likely what made it attractive to the first settlers here. The high ground meant an excellent view of the surrounding area, just perfect for defence.

The castle was originally called Din Eidyn and was a simple fortress in a thriving Roman settlement. However, in 638 AD the Angles invaded and gave the fortress and its surrounding area a new name, Edinburgh. The town grew up around this fortress area, with the first houses built on the street now known as the Royal Mile (so called because it was the route royalty would take to and from the castle grounds.

During the Middle Ages it became Scotland’s first royal castle, providing a home to the sheriff of Edinburgh and a station for many military troops. Along with this, the royal gun train and the crown jewels were stored here. Many of the buildings we see today were erected at the instruction of King David I in 1130. Most notably perhaps is the chapel dedicated to his mother, Queen Margaret.

Edinburgh Castle has endured much during its long life, including sieges by Scotland’s enemies. The first to capture the castle after a three-day siege, was Edward I in 1296. However, once Edward died the Earl of Moray, Sir Thomas Randolph reclaimed it for the Scots in 1314. In this daring attempt, only 30 men scaled the northern cliff-face under the cover of darkness.

Twenty years after this, the English captured it again, only to have it taken away 7 years later by Sir William Douglas who disguised himself and his men as merchants and won it back via a surprise attack.

During the Wars of Independence, much of the castle was ravaged by destruction. During the restoration, David’s Tower was built (believed to be in the Scottish Baronial style) by David II in the 1380’s.

Three stories high, it functioned as the entrance to the castle which further protected it from any attack. However, when Mary Queen of Scots was forced to flee to England many people still held the castle for her and her rightful place as their queen.

Below is an imge of David’s Tower that I found on Wikimedia which will give an idea of what it looked like. 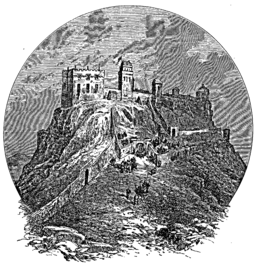 Most notably was Sir William Kirkcaldy, governor of the castle, who held off attackers for a whole year until they destroyed the tower and with it the only water supply. The inhabitants were soon forced to surrender, and David’s Tower was no more. The final monarch to live here was Charles I in 1633 – before his coronation as King of the Scots.

In the 18th century, some of the Jacobite rebels sought to retake the castle in much the same way that Sir Thomas Randolph’s men had by scaling the cliffs. However, they did not succeed, and the castle remained sturdy as ever. Nothing this dramatic has occurred in the history of Edinburgh Castle since.

Unlike Culzean Castle which is run by the National Trust for Scotland, Edinburgh castle these days is operated by the Historic Environment Scotland and British Army. It now serves primarily as a military station and the Scottish National War Memorial.

It is also host to the world-famous Edinburgh Military Tattoo with spectacular performances held in August every year.

The castle is nowadays home to the Stone of Destiny. The stone which proclaimed the rightful King of Scotland and used as part of the crowning ceremonies was originally located at Scone Palace Perthshire.

Not many other castles come close to having the same dramatic history that Edinburgh Castle does and no trip to the city is complete without walking in the footsteps of many, many amazing people.

This site uses Akismet to reduce spam. Learn how your comment data is processed.